Bukhara - one of the oldest cities of Central Asia, is established 2500 years ago, "Star of the Islamic world" and "The Holy city of Central Asia" received its titles because in the Middle Ages there were 360 mosques and 80 madrassas in Bukhara. An old legend says that all Muslim city descends from the sky the light of grace, and it rises only over Bukhara.

In the Islamic world, it is also well known for the great representatives of Sufism, who contributed to the formation of Bukhara in the sacred, noble city of Islam.

We suggest you visit The Seven Saints of Bukhara - the great Sufi Naqshbandi brotherhood - that is one of the most influential Sufi brotherhoods in Uzbekistan.

Gizhduvan- the birthplace of the first saint of the seven - Abdalhalika Gijduvani (1103-1179). He is the founder of an independent school of mysticism in Maverannahr known as Hadzhagan (Path of teachers).

Al Gijduvani continued the spiritual teaching of Yusuf al-Hamadani, introduced the silent dhikr, and formulated the eight rules, the basic principles of spiritual and religious teachings, underlying the basis of Tariqa hadzhagon.

Abdalhalik Gijduvani buried in Gijduvan at the feet of his mother. Next to the burial of Hazrati Sheikh Abdalhalika Gijduvani in 1432-1433.

Visiting burial place of Khoja Arif Rivgariya, or Saint Khoja Arif Mohi Tobon - one of the most famous Sufi of Central Asia.

Khoja Arif Rivgary was one of the worthy followers' tradition of hadzhagan - followers of Sheikh Abdalhalika Gijduvani, after whose death he led the Brotherhood. It is the second feast of The Seven Saints of Bukhara.

Khoja Mahmud Angirey-fagnavy is a famous Sufi of his time, recognized as the spiritual authority of Maverannahr. He was the first who introduced the public dhikr in accordance with the needs and requirements of the time. When Sheikh was asked about these innovations, he replied: "Let sleeping will wake up."

Khoja Mahmud Angirey-fagnavy died in 1286 or 1307 and was buried in his native village.

Khoja Ali Ramitani - one of the famous spiritual authorities Sufi of Hadzhagan School, the greatest master of wisdom, has a high spiritual quality and charisma. Because of his popularity and the sanctity, people of the Sheikh called him "Azizon" ("honorable Sheikh").

A set of sentences carefully passed from generation to generation - both orally and in written sources, belongs to Sheikh Ali Ramitani. It is known the following statement: "Watch yourself in two kinds of action - when you speak and when you eat."

Khoja Muhammad Babai Sammasi - famous Sufi mystic, an adherent of the hadzhagan school traditions, follower and student of the Sufi Khoja Ali Ramitani. He was the fifth of the Seven Saints of Bukhara.

Khoja Muhammad Babai Sammasi made a valuable contribution to the development of the Sufi Hadzhagan School in the development of concepts and techniques of Tasawwuf, which are described in the works of his followers "Makomoti Қulol World" and "Makomoti Shokhi Naқsh gangs."

Kulal ("Hanchar", "potter") - one of the spiritual authority, Sheikh of Sufi Hadzhagan school, sixth in the chain of spiritual succession silsila of this school.

According to various sources, Sheikh Sayyid Amir Kulal was the first pir of the great ruler Amir Temur. They met in 1363

Having a large number of followers, Sheikh often spent time in conversation and instruction. According to tradition, Khoja Sayyid Amir Kulal paid special attention to the prevention of minor misconduct, warning from them his students and quoting the Prophet Muhammad that even minor sins committed by people daily, tend to turn into great sins and lead to hell.

8. Transfer to the burial place of the Naqshbandi Bibi Orif mother.

Visiting the burial place of Saint Bahaaddina Naqshbandi. - The largest representative of the Central Asian Sufi in the XIV century.

Abdurrahman Jami wrote that Bahaaddina "has never had a slave". When Sheikh was asked the reason for this, he said: "Being a servant of God and be a lord is incompatible".

After the death of Bahaaddin, he has been recognized a "saint" (wali), a Miracle-Worker, the saint patron of Bukhara. Bahaaddin Naqshband did not call his followers to asceticism, on the contrary, he obliged them to be diligent farmers, artisans, merchants, peacefully coexist with the official Islam.

10. Transfer to the train station. 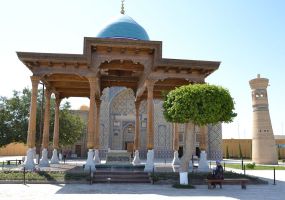