The Great Silk Road - the legendary trade route, which connected East and West, China and the great Roman Empire. Many beautiful cities, historical monuments, ancient customs, and even states have been established thanks to it.
Along the Silk Road were moving not only trade caravans, but also cultural achievements of peoples, spiritual values and the religious ideas were spreading through it.
We offer you a unique tour through the historical trading centers of Central Asia. Enjoy the beauty of the ancient Uzbek cities such as Samarkand, Bukhara, Khiva, Shakhrisabz, Tashkent and visit their architectural monuments, representing the long history of Great Silk Road.

Arrival in Tashkent and meeting with a tour assistant. Transfer and accommodation at the hotel.

Dinner and overnight at hotel.

Breakfast at the hotel.

A full day of city sightseeing. Visit the Ulugbek Observatory (XV), where the remains of grand astrolabe for observation of star position and the Afrasiab ruins with the museum; the Shakhi Zinda - the necropolis of Samarkand rulers and noblemen, the Bibi Khanym Mosque (XV) and the Siab Bazaar.

Lunch at restaurant. In the afternoon continue sightseeing. Visit the Gur Emir (“Tomb of Emir” from tajik), the Mausoleum of Temur and his descendants (XV), Registan Square. Dinner and overnight at hotel.

Transfer to Shakhrisabz. Arrival and accommodation at the hotel.

Visit  Ak-Saray Palace, the summer residence of Tamerlan (XIV), the Kok Gumbaz Cathedral, the mosque built by Ulugbek in honor of his father (XV), the meditation house and in the end the Crypt of Temur. Lunch at a private house. Transfer to Bukhara. Arrival and hotel accommodation.  Dinner and overnight at hotel.

Breakfast at the hotel. A full day of city sightseeing. Visit to the Poi-Kalon Complex, the square separating the Mir-I-Arab Madrassah and the Kalon Mosque;  the Kalon Minaret (“grand” from Tajik), one of the Bukhara’s symbols of 47m high (XII), three bazaars - Taqi Zargaron, Taqi Telpak Furushon and Taqi Sarrafon, the Magok-I-Atori Mosque, the remains of a Buddhism monastery, a temple and a mosque, the Nadir Divanbegi Madrassah, built in XVII, the Kukeldash Madrassah, one of the greatest Islamic schools of Central Asia.

In the afternoon visit to the Ark Fortress, a city-in-city, as ancient as Bukhara itself, having served as the residence of Bukhara’s governors for a millennium; the Bolo Hauz Mosque, the Ismail Samani Mausoleum (IX-X), one of the most stylish constructions of Central Asia. Dinner and overnight at hotel.

Lunch at restaurant. Dinner and overnight at hotel.

Breakfast at the hotel. A full day tour of Khiva, the most ancient and conserved city on the “Silk Road”. Visit to the Mohammed Amin Khan Madrassah, the largest one of the city, the Kelle Minor Minaret, commissioned by khan in XIX and planned to be the highest one in the Islamic world (84m) but after his death the construction was quitted at the height of 28m; the ancient Kuhna Ark fortress built in the XII century and then extended during the XVII century, there are a harem, a mint, a stable, an arsenal, a summer mosque; the Mausoleum of Pakhlavan Mahmud, the patron saint of Khiva. Lunch at a private house. Visit the Islam Khoja Madrassah and Minaret, the most recent monument of Khiva; the Juma Mosque, interesting for its 213 wood columns (3,15m high); the Tosh Howli (“Stone House”); the Allah Kuli Khan Madrassah, Bazaar, and Caravanserai.

Transfer to the airport for the flight Urgench - Tashkent. Arrival and hotel accommodation.

Dinner and overnight at hotel.

Breakfast at the hotel.

Transfer to the airport. 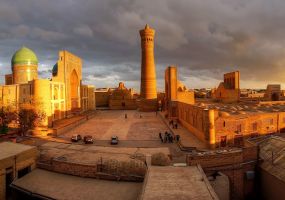 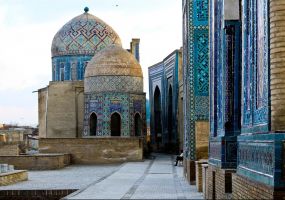 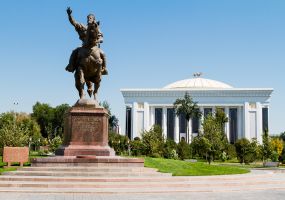 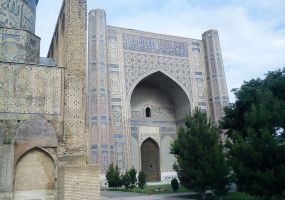 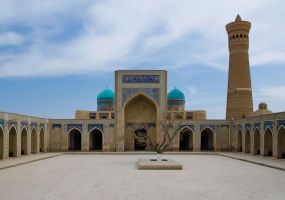