Tashkent - a city of cultural tolerance

Over the long history of Uzbekistan preachers of all religions of the world passed through its land: Buddhism, Christianity of different directions (Orthodoxy, Protestantism and Catholicism), orthodox Islam, Sufism and Zoroastrianism.

It lives in peace and harmony more than 100 nations and nationalities, along with indigenous Uzbeks and peacefully coexist holy temples of Muslims, Catholics, Protestants, Orthodox Christians, Jews, Buddhists.

The meeting of religions in history, culture and the moral consciousness of the inhabitants of the metropolis of Tashkent visibly embodied in the monuments of religious architecture of the various religious denominations in the territory of modern Tashkent.

The tour must be arranged in time to worship in the temples, to respect the beliefs of people, to dress decent clothes and be reasonable, polite and tolerant. 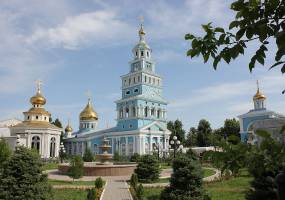